The following story was shared by Sheila Oscroft, a leader from Maun Valley Citizens, at the Anglican Symposium on the Common Good at St Nic’s Church in Notthingham

I am going to share an action that began with a heartbreaking story.

2015 Maun Valley Citizens extended into Ashfield and a dozen or so from St Mary Magdalene Church, Sutton attended the Listening Assembly, because we were told ‘it would be interesting’.

We discussed what areas in our locality were of concern to us and decided we would like to see safety improved on the A38.  18 months previous – a young mum, from our church had been killed on this road, while training for a charity cycle race.  She left a husband and two young sons, we were devastated.

This Action was accepted and our work started.  With support and help from staff and pupils, St Mary’s and Leamington Primary schools whose Year 6 would soon become Year 7 pupils, and would have to cross this busy A38 to Ashfield School every morning and home time. 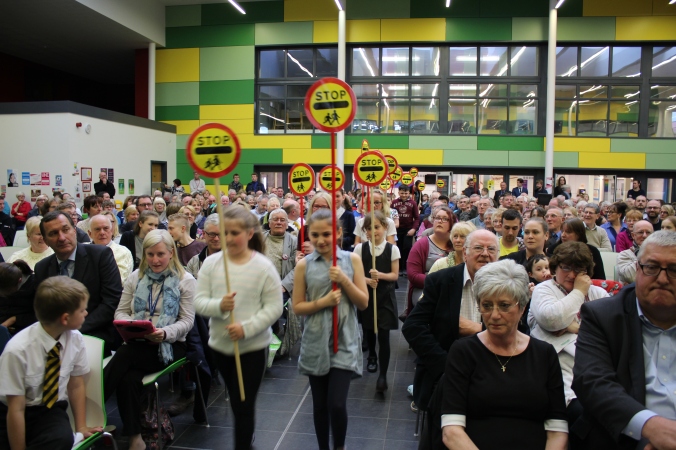 A core group was formed and action planned, with the help of Maun Valley Citizens.  We collected evidence from ROSPA, Ashfield District Council, Nottinghamshire County Council, Nottinghamshire Police, and local residents living near the A38 – one had the proposed original map for this carriageway.  Showing that Sutton and Kirkby Road would remain intact, and the dual carriageway would be an underpass, not so, this would have cost far too much money.

We canvassed pupils from Ashfield, they were more than willing to share how this crossing is not fit for purpose.

I’m sure you get the picture of how dangerous this crossing was for that period of 20-30 minutes each morning and afternoon.

We petitioned for a footbridge, and soon realised this was way too ambitious, Citizens helped us research what could be achievable and our campaign grew stronger.

We had three asks:

Keith Hebden, Co-Chair of Maun Valley arranged a meeting with Alan Rhodes, leader of the County Council, and David Pearson, Director of Public Health, only allowed six representatives were allowed at this meeting.

Being fair to Alan Rhodes and David Pearson, they did listen, but their replies were expected – and they didn’t let us down, of course cost was the problem….

I challenged both Alan and David – as to what price  they put on a life…. the policy states two more people have to die, child or adult before this stretch of road can be  classed as  ‘dangerous’ – We cannot put a cost on human life – Would any of us like to be the one to choose the child or adult who will be the next to die.

Our friend and colleague had been killed on that road, it was evident this information disturbed them.

Alan Rhodes did imply that three of the criteria might be possible as they were low cost…..

A footbridge, was way beyond their budget, we would need to look at separate funding, and sponsorship/  This then was a NO.

We will not forget, and if circumstances change, we will revisit them for a footbridge.

Alan Rhodes and  David Pearson attended the 2016 May Assembly with over 420 people.   Before the start, they told us they wouldn’t be able to meet our demands to make the A38 safer.  Not even the three low cost asks.

And then a Year 7 student, 11 year old Phoebe Halfpenny from St Mary’s Church and a new pupil at Ashfield School told her story… there was absolute quiet in that assembly as she spoke.  Phoebe told us  how terrified she was when she had to cross this busy road, wondering whether she would get across safely, or if one of her friends or classmates would be hurt that day.  Phoebe also recounted the death of her two friends ‘mum’ who had been killed on that road.

Then around 50 children paraded to stand in front of Alan Rhodes. Each with a lollipop saying STOP – CHILDREN CROSSING a very visual reminder 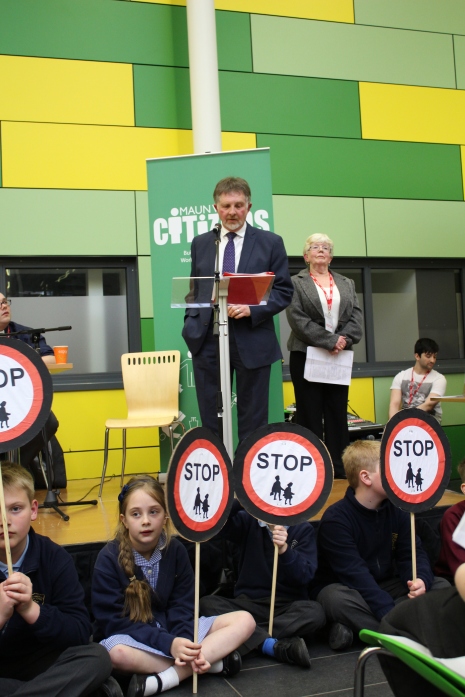 Listening to Phoebe, Alan Rhodes was observed turning to his colleague, and through gritted teeth, saying ‘we have to go with it’.

I was to pin Alan Rhodes; I had messages coming at me from everywhere me, – yet when I asked for these improvements to the A38 he said YES,(imagine my amazement) …..  (addendum) apart from the fact the road was not wide enough to enlarge the central reservation.  I questioned whether or not they had considered making these longer…

The Traffic lights were re-phased.

From the Assembly in early May, this improvement work was carried out mid July to the end of August, before school re-started after the summer break.

As good Citizens members’ and with courtesy, our thanks to Alan Rhodes and Highways Director, Gareth Coles, for doing this work so speedily was expressed suitable gifts were given to them from the children of Leamington, St Mary’s Schools and Maun Valley Citizens.

An example of local schools and churches working with Citizens to campaign and make a difference.